- August 28, 2019
For a while I was really getting into Kickstarter for various 3D printing options, and while there are still some out there, I found myself often getting more than I could ever reasonably print, but still paying for the files.
To compromise between being practical and still enjoying the thrill of finding new things to do with my printer to support my hobbies, I decided to explore Patreon instead, finding a couple of artists who do work I like who could then keep me in a steady flow of new material for a reasonable rate.
Four artists I support are Aaron Mulder, Rocket Pig Games, Pinyo, and PrintYourMonsters.  Of those four, Aaron Mulder tends to make items to use with Fat Dragon Games' modular dungeons and Pinyo tends to make buildings (incredible ones). It's Rocket Pig and PYM that ship out monthly designs of miniatures, which I want to incorporate into my games somehow.
In August, Rocket Pig released a ton of undersea creatures.  I'm not entirely sure how those get used in a typical fantasy campaign, but I suspect it has something to do with WotC releasing their Saltmarsh campaign.  PYM has recently released a bunch of carnivorous plants, which work really nicely with Rocket Pig's July release of corrupted forest creatures.  Both of them have given teaser images of their next month's projects, shown below. 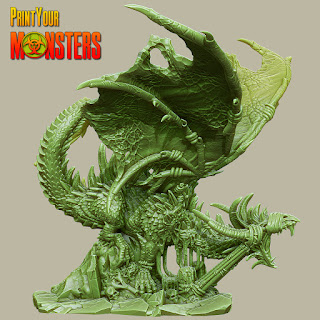 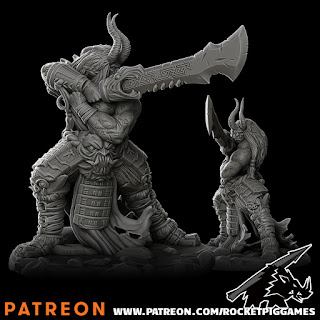 So checking in with myself and my own head, what am I feeling about all this?


More to come soon, including finding a way to fold my Patreons' product into my gaming groups.
3D Printing D&D

Over at Strange Vistas

- February 19, 2019
I checked the stats, and my last post telling people I moved has gotten over 120 views, while at the new blog I'm lucky to get single digits.  So what have you missed over there?

Over 20 new posts.Descriptions of the D&D campaign I've been running since 3Q2018.Several painted miniaturesA whole bunch of things I have done on my new 3D printer, including a modular dungeon and a cosplay Star Wars blaster. So go check out Strange Vistas, unless you're a Russian gambling robot, whom I am suspecting made up more of my readership that I had feared.
Read more 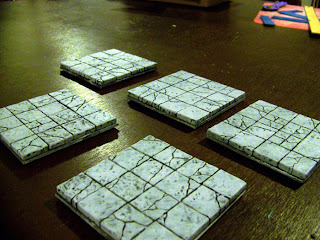 I made five 4" by 4" dungeon tiles, which is 80 square inches, almost twice my usual batch of tiles.  When added to what I've done already, this is how big a single room I can make:


I'm probably going to take a little break from this project.  It has turned out well, but until I'm closer to doing a fantasy game I'm going to focus on the games I'm actually doing.
Speaking of which, it's game night tonight...

Boy, it feels good to see a project through to completion.  The color scheme looks really good.  It was a good first run, especially in getting an idea about much terrain a single box can hold.
So what's next?  A dungeon?  A crypt?  Science fiction?