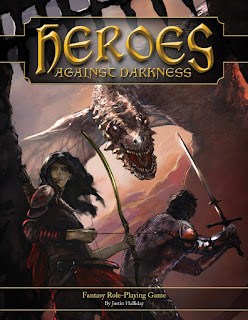 For my birthday I picked up a print copy of Heroes Against Darkness by Justin Halliday.  Why, might you ask, would I spent hard currency on a book that is offered as a .pdf for free?

First, I like real books.  I read them better, and can do so in places other than in front of a computer monitor.

Second, it's worth it.  Beats me if Halliday makes any money off the sale or not, but I hope he did, because offering this game for free was a very generous gift to the gaming world. Heroes Against Darkness is worth owning. (At least if you are me.  Your mileage may vary.)

Heroes Against Darkness is, by its own admission, a "fantasy heartbreaker," which is the usually derogatory term used by someone's homegrown version of Dungeons & Dragons.  If I had to summarize HAD's genetic heritage, I'd call it an early edition of D&D done using Fourth Edition mechanics.  If that early edition had 11 character classes.

HAD has the standard D&D stat layout (Strength, Dexterity, etc.) and the archtypical fantasy races (human, dwarf, elf, etc.) with the usual add-ons like half-elf and half-orc.  Add to that an ersatz tiefling race and you have the idea.  The eleven PC classes mostly involve expansions of the core D&D classes.  There's a warrior, barbarian, and berzerker (separate from barbarian) as the martial classes.   Rogue and hunter for the stealthy guys.  Five different magic-wielding classes to reflect the typical schools of magic: necromancy, healing, blasting stuff, enchantment, and protection.  And finally one cross-over martial/healer that's not called "cleric" but "hospitaler."  That's not a bad breakout.  The magic classes are by design specialized, which is good because you can't really specialize in a class itself.  What makes this feel a little older-edition while still like 4E is that as your PC advances in his or her class, new abilities are unlocked (like 4E), but you don't get any choices about what those abilities are.  All berzerkers get the same tricks at 3rd level, or 6th, or whatever.  That will likely be a turn-off to players who like to game the class system to come up with whatever "character build" they are seeking, but lately that's been my biggest turn-off in recent D&D editions.

Another Fourth Edition quality that HAD has that I like is its use of creating encounters using a budget of XP that is spread over multiple monsters who have different roles, like Brutes or Casters.  I liked the "monster ensemble" quality of 4E encounters because they gave mobs of orcs, et al diversity instead of being eight carbon clones of each other.  They also helped negate the advantage PC groups tended to have in their strength of numbers.  Where Halliway really shines in this edition, and arguably his best game feature, is that he provides an extensive framework for building your own custom monsters, including scaling them up by encounter level and monster type.  The process seems much more organic than Pathfinder's system of adding PC levels.  If you have any craving to create your own monsters but weren't sure how to build them using a ruleset, HAD is right for you.

The magic system is the biggest break from D&D, insofar as they eschew the Vancian "fire and forget" spell structure and instead use a system of "amina points" which are burned to cast spells.  That follows a lot of non-D&D fantasy systems,

Finally, it's worth reading the introduction.  Most of the time I skip these, but this one is brief (a quality exhibited throughout the book).  In it Halliway gives probably the best argument for the existence of "fantasy heartbreakers."  I was thinking about this essay of his just a few days ago when I read a blogger engaging in some pretty blatant "badwrongfun" ranting about how other gamers get it wrong because they don't like what he likes.  I won't re-phrase it here--it's worth the time it takes to download a free game and read it for yourself.  But the bottom line is that Heroes Against Darkness hits a lot of my sweet spots when it comes to heartbreakers, and for a great price, .pdf or hardcover.
Heroes Against Darkness reviews 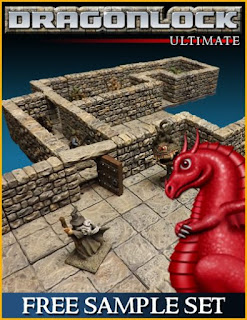 Last Christmas, I was given a 3D printer as a present and began immediately building the type of gaming items I used to use Hirst Arts molds to create: terrain for wargaming and modular dungeons for roleplaying games.  When I researched the topic, going online and talking to friends, I found first one company, then a second who provided the "patterns" for making modular dungeons. The first was Fat Dragon Games , which makes not only files for modular dungeons but also fantasy buildings, the odd sci-fi terrain pieces, and most recently a huge batch of fantasy monsters to be printed out on your printer.  In addition, the owner of the company, Tom Tullis, created a huge support network through social media and YouTube on maintaining and getting the most out of your printer, tips and tricks, painting guides, etc.  Recently FDG participated in a great Humble Bundle charity program where you could buy a significant amount of their product for a ridiculously low price, of all of wh
Read more