Showing posts from June, 2011
Show all

The Mystery RPG Box of Mystery: Round 2 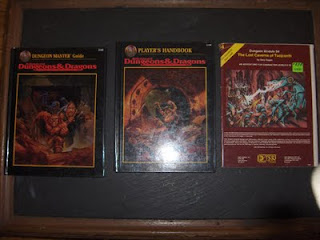 The Mystery RPG Box of Mystery: Round 1 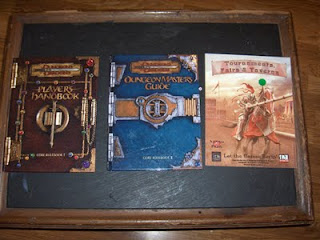 So, I open the box and pull out the first three books... [facepalm] Okay, the first three books out of the Mystery Box of Mystery are: Dungeons & Dragons Third Edition Player's Handbook (Wizards of the Coast) Dungeons & Dragons Third Edition Dungeonmaster's Guide (Wizards of the Coast) Tournaments, Fairs, and Taverns (Natural 20 Press) So, the first two books are two of the three core books for the third edition of D&D, which came out in 2000.  Their release marked a huge tectonic shift in the RPG market, both by having the biggest RPG in history radically change their rules, and second by allowing third party publishers create sourcebooks for the game.  Suddenly everyone and their brother were getting into the publishing business. One example of that process is the third book, Tournaments, Fairs, and Taverns  which is full of, not surprisingly, tournaments, fairs, and taverns.  Most of the book has rules for all different kinds of games (29 in all): card
2 comments
Read more

The Mystery RPG Box of Mystery! 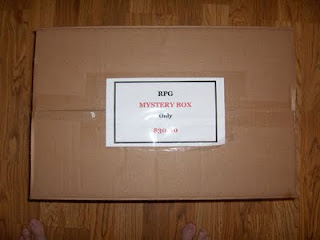 I will admit, it was pure psychology.  I am visiting the Half Price Books near my house and as always am checking out the RPG section.  Interesting enough, they have multiple copies of the books from the Dark Heresy RPG, but even at half price are still prohibitively expensive.  On the floor by the RPG shelves, however, is this box: I did not purchase the box at that point.  I went back to the store that evening and bought it, because it took me a few hours to succumb to the pure temptation of what might or might not be in a box that is roughly 24" wide, 14" long and 12" deep.  But I finally did, telling myself that at for thirty dollars I could almost not go wrong.  By the way, the box weighed at least forty pounds and was completely full, so we are talking two stacks, what could be almost two feet of gaming material. So, here's the game.  I am going to open the box and slowly remove the contents, three books at a time.  I will show what three books I have remove
2 comments
Read more

- June 26, 2011
It has been months since I posted anything to this, my RPG-themed blog.  That isn't because I haven't been busy, I've been quite active doing various hobby-related stuff, but it has mostly been involving wargaming, and so  that stuff has been posted to my other blog, The Army Collector . But I've also been steadily playing Dungeons & Dragons, so just to get caught up, here's what is going on: A few months ago one of my players asked if he could run this adventure that he has always liked called "The Red Hand of Doom."  Since I was feeling a little overwhelmed by the pressure of coming up with something every two weeks, I said that would be great.  Since then we have been playing The Red Hand of Doom steadily, with my playing Renerris, a Tiefling Warlord (Tactical Build).  We also added two new players which got the group up to a reasonable size.  Sadly, one of those players is already moving away (the curse of all gaming groups, it seems to me) but
Post a Comment
Read more
More posts