Showing posts from September, 2015
Show all

- September 28, 2015
Author's note: EOW is the annual three-day gathering of my friends where we spend those days doing three independent day-long gaming scenarios using a homegrown ruleset.  You can learn more about EOW by clicking on the EOW tag on the right-hand menu bar of the blog. This year for EOW I'm doing a Star Trek scenario taking place in the middle of the Deep Space 9 series around the early part of the war with the Dominion.  I have no less than nine players, so I decided the best thing to do would be to break them up into two groups: a Federation crew and a Klingon crew, each with their own (underpowered) ship.  It is a complicated session for me.  For one thing, I'm not that familiar with DS9.  Two, there's the number of players, although they are used to being in a big group.  Three, the scenario is long and complicated in order to fill an entire day, but I'm worried because you never know when something will go off the rails and the whole thing grinds to an early sto
Post a Comment
Read more

The Moment in a Campaign

If you ask me why the Claremont era of the X-Men was so damn good, I would have to say that it wasn't the whole "Dark Phoenix" saga, or even "Days of Future Past" (although that was very good), it is the in-between moments in the series.  I'm talking about the moments between the fights where you would see the X-Men hanging around in their 70's turtlenecks and mod dresses shooting the breeze about being an unloved mutant superhero or who they have a crush on or whatever.  It was a moment when they were people and not just powers, and you the reader had the chance to actually experience the fullness of their lives. The X-Men have since lost this.  Just look at any comic book and see how infrequently the X-Men are out of costume.  Our appetites now reflect a stronger desire to more action, more splash pages, and bigger conflicts.  And in my opinion, the comics books are less interesting as a result.  You can see this in other genres, that question of pac
1 comment
Read more

The Fruit Bat of Frustration (MHR)

For Adam.... The Fruit Bat of Frustration (real name unknown) Affiliations: Solo d8, Buddy d4, Team d6 Distinctions: Annoying Little Twat, Relentless, Ambiguous Identity Powers CREATIVE ENERGY VAMPIRE Flight d6 Claws d6 Enhanced Reflexes d8 Emotional Control d10 SFX: Sapping Your Mojo .  When creating a "In a Funk" complication, add a d6 and step up the effect die. SFX: Right Where I Want You .  When the GM is trying to alter an Affiliation status of a PC in an encounter with the Fruit Bat of Frustration, step down the effect die necessary to do so, reflecting either effectively isolating the PC from contact with friends, or putting him in an unsatisfying gaming group. Specialties Covert Expert Menace Expert Psych Master
1 comment
Read more 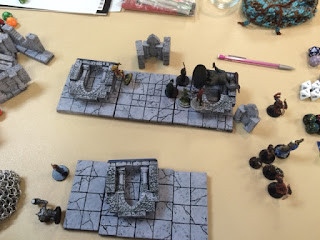 Trying to depict gaming in a dungeon that just turned 90 degrees. After the Prophetess debacle in the last session, the group decided to use the chaos and carnage of the three-way battle between the Puppeteers, the Parliament of Bone, and the Children of the Third House to try to take at least one of the major gangs off the board.  After some research and intel collecting, the group decided the easiest group to neutralize would be the Puppeteers.  And, after shaking down a halfling named Greeble, they knew where to look. The Puppeteers home base was a weird layout of cylindrical hallways filled with golems and in one chamber a pulsing magical furnace.  After Sign (the party's thief/fighter assassin) ganked the head Puppeteer with one blow, the entire compound began to move.  Or more accurately, stand up. The whole base was a colossal sized golem with a hollow interior.  It also was about to self-destruct.  Alaric the monk, Corwin the cleric, and Roghanj the sorcerer all
Post a Comment
Read more

What you want, what I want 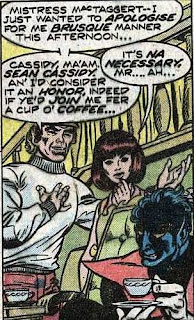 So...Adam at Barking Alien wrote this .  And then some guy who actually thinks you have to type out accented English like you're Chris Claremont writing the X-Men Banshee commented on his post. Only not that charming. The issue, and I feel like I can say this without too much concern about misrepresenting Adam, is that over the years Adam has found that he has engaged in more interaction with his players when it comes to building his campaigns than he did when he was a wee lad and he felt more free to run what he was genuinely loved and players would just trust him that it would be good. Slipped in there is a bit about how players sometimes ignore what the GM is proposing in terms of tenor and theme for a campaign and create something totally out of whack with the campaign.  I know exactly what he is talking about.  It's the guy who wants to play a werewolf in Vampire the Masquerade  (happened) or a no-costume mercenary in a four-color superhero game (also happened, alt
2 comments
Read more

- September 04, 2015
So there's a new force in the town of Grimfest--"The Prophetess," an ancient dragonborn seeress who claims to be able to answer any question as long as you give her 700 gp. and answer a question of hers first.  After impressing the four rival gangs of Grimfest (and getting four of the PC's to ask her questions), she announces that she will answer the question everyone wants answered--where is the tarrasque--but only to the highest bidder.  Three of the four gangs show up with tons of treasure in tow, while the PC's merely offer her a song and a holy book.  After announcing the highest bidder, violence breaks out among the three groups and in all the chaos and carnage the Prophetess appears to have escaped with all three gangs' bids while no one got the answer.  The PC's in the meantime manage to escape and then take advantage of the situation by going and knocking over a stronghold of the Parliament of Bone. With all hell breaking loose (literally), the
Post a Comment
Read more 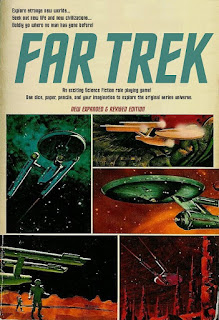 So, as I mentioned recently, I've got a lot of sentimentality for Star Trek RPG's, and Star Trek in general.  Three actual honest-to-God licensed ones exist in history: FASA's, Last Unicorn Games, and Decipher's.  I own the first two and have heard mixed things about the third. But there are also a lot of non-licensed Star Trek RPG's out there, and recently I saw that one of them, Far Trek , was offering a hard copy for a couple of bucks on Lulu.  Never one to let a deal go by I picked it up and thought I'd give you, gentle readers, my thoughts. Far Trek is a light-hearted, even breezy take on the Star Trek universe, almost exclusively the original series.  There rules incorporate stats, skills, and talents.  There are four stats: Strength, Dexterity, Intelligence, and Charisma, with the stats ranging from about a -2 to a +2, reflecting their modifier on the die roll.  I actually like this mechanic, which I first encountered in True20.  It doesn't ma
6 comments
Read more
More posts