Showing posts from September, 2012
Show all

Why it pays to ignore the rules sometimes

- September 24, 2012
Last Friday we had a pretty satisfying gaming experience with my 4E D&D game, making it two pretty solid sessions in a row.  Both times I've begun to learn some lessons about what works and what doesn't. First, the most recent session featured a Hannibal Lector-esque figure named Benalkazar (whose name was stolen shamelessly from some a family I know).  Benalkazar is a humanoid figure with a long robe, gloves, and mask who claims that he hasn't seen his face "in years."  The PC's don't know what he is.  Altered human? Demon?  Aberration?  Minor god?  He can do stuff magically that aren't in the rules, like perform rituals without materials.  He has a magic item also not in the rules.  And he basically snookered the PC's into releasing him from this prison, and then sent them an engraved thank-you note.  I half expected them to either side-track their current quest to go after him or at least file it away for a future quest, but instead the pl
Post a Comment
Read more 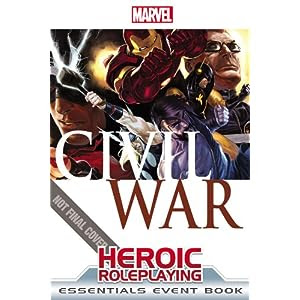 If it was cheaper, I'd feel better about having bought it. Okay, so the "Civil War" was a major event in Marvel Comics that set the narrative for most of their titles for years to come.  It was also a thinly-veiled commentary on post-911 Patriot Act-era America, and set a very gritty, post-modern tone for the company that pretty much existed through the "Siege" storyline when they decided to just pretend like most of it didn't happen. So if you set the Marvel Heroic Roleplaying game at the beginning of the Bendis-era Avengers, then the Civil War is the obvious follow-up (they have already announced that they will be releasing the Initiative as a sourcebook). But how does it far as a sourcebook?  Well for starters, if you're not setting your MHR campaign in the mid-2000's, all you are really getting is a smattering of NPC's that are often already available as fan-made datafiles on the internet and vague idea about how the creators want you
1 comment
Read more

Getting down to business

- September 08, 2012
I'm running a quasi-sandbox D&D 4E campaign right now.  I use the term "quasi" because I don't have an elaborate map of the city of Grimfest, where the campaign is largely located.  What I do have is a running tally of multiple quests, anywhere from three to seven on average, that the PC's can tackle.  So before each session the players tend to email each other saying things like, "hey, those ogres are continuing to hassle the outlying farms around Grimfest, but I really want to return this statue to its rightful place at the temple of Eternal Dawn." The Icicle Club, a   private club for the wealthy and decadent of Grimfest that also serves as the hunting ground for a group of vampires led by a Baelnorn Lich, has been the most engaging of locales.  Earlier the group had infiltrated the club and discovered the lich's presence (also, on the side, destroying a few of the master vampires that make up the lich's inner circle). Last night the p
Post a Comment
Read more
More posts