Showing posts from January, 2016
Show all

I've been buying very few actual gaming books lately, but have been slowly adding books about RPG's and GM techniques to my library.  The latest is a book called Hamlet's Hit Points  by Robin Laws.  For those who don't know, Laws is one of those game designers who has had his thumb in the pie of so many different RPG's out there he didn't even bother listing his bona vides in the back of the book. The core thesis behind Hamlet's Hit Points is that in movies and plays (and their descendants radio shows and television programs), there are nine identifiable "beats," specific moments in the narrative flow with a purpose.  There are two major kinds of beats: procedural, which either move the protagonist towards or away from an external goal; and dramatic, which move the protagonist towards or away from an internal goal (such as a personal relationship).  The movement towards and away from a goal creates two emotional responses from the viewer: hop
Post a Comment
Read more 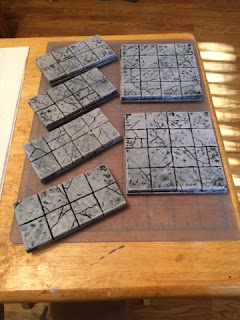 With my not running anything these days I have time to just cast and paint and make more dungeon tiles, like these.
Post a Comment
Read more

- January 26, 2016
I've been kicking this post around for a while, but it seemed like a good time to go ahead and publish it. One of the real frustrations that I have experienced when running RPG's is when the players, for whatever reason, create Player Characters that just don't fit.  Maybe it is ego.  Maybe it is a belief that discordant PC's are better PC's, or will have more advantages, or more of a story.   Maybe they just thought it was a good fit, even it is wasn't. As an example, when I first ran Vampire: the Masquerade  lo those many moons ago, I was planning on doing a pretty typical V:tM campaign with internecine plots and Machiavellian politics.  I had two problems.  The first was the player who wanted to play a werewolf (this was before there even was a werewolf RPG from White Wolf).  The second was a player who wanted to play Batman.  Seriously, his PC's concepts would be that he would wear a mask, fight crime, and drink the blood of criminals and blood banks
2 comments
Read more

Friday night game recap: the end of (my) D&D campaign 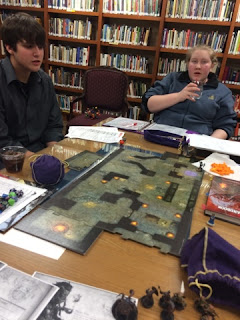 I'm I had decided this would be the last time I would run 5E for the gaming group.  That meant they had to take out the last gang in Grimfest, the Parliament of Bone.  It also meant I needed as GM to do two things: have it go out with a bang, and navigate ten players (as it turns out, I only had nine). So I came up with a plan, one I will admit made the game session seem more like a gaming convention than a typical home-based RPG session, but I had a big challenge. First, I asked one of the players to co-GM for me.  Rob S. (not to be confused with me) had been running a mini-D&D game with his wife Rachel for a few months, so he had learned the tricks of the trade.  Then I devised a series of linked scenarios through which the PC's would move in two groups. Scenario A had the PC's protecting lizardmen children (they had befriended the tribe awhile back, and the lizardmen were frequent NPC's) from an attack from the Parliament.  Succeed at the group would get a
Post a Comment
Read more 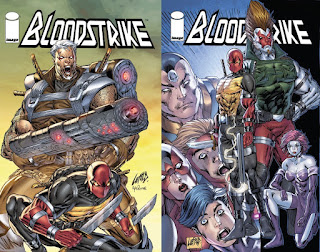 Is there any person who exemplifies the Iron Age of comic books better than Rob Liefeld?  Now I am a pretty critical person when it comes to the Iron Age, but I will admit that I bought the comic books (along with a gazillion other people) in hopes that it would lead someplace interesting.  It didn't.  It led to over-indulgences like foil-covers and bagged comic books hoarded away by collectors thinking the comics would put their kids through college in twenty years. But hey, Rob Liefeld apparently got enough people to back his Kickstarter to start publishing Bloodstrike and Brigade again.  I'm suspecting ironic hipsters may be to blame here. But the thing that brought a real smile to my face was Liefeld's "homage" covers that he drew for Bloodstrike. On behalf of every comic book store owner who ever got burned by Liefeld's spotty work ethic, I would joke that these two comics took him eight months to create, except that apparently he just trace
Post a Comment
Read more

- January 12, 2016
So if you want to write your own material for the Forgotten Realms and sell it in the online D&D marketplace, you can do that now: http://dnd.wizards.com/articles/features/systems-reference-document-srd
Post a Comment
Read more

- January 12, 2016
Recently, a member of my gaming group named Rachel started running her own game, a zombie-apocalypse campaign using the FATE rules.  Initially I thought this would like "the Walking Dead" but Rachel has interposed weird cults and alien minotaurs (all of which are excellent) which is far afield of what you'll find on the TV show. I asked Rachel at the onset why she chose a zombie game, given that I had never heard her express enthusiasm for the genre, she said it was exactly because she didn't care for the genre very much.  She doesn't care for brutality in entertainment, or a proliferation of firearms in gameplay.  Her argument is that she would not want to experience the world as a player, but could somehow tolerate as the GM because she knew the players would enjoy it. It seemed really cockeyed to me, because I would think that if you didn't love the game world you were creating, it would become burdensome to continue to be the navigator and adjudicator
1 comment
Read more

Reflections after year of Fifth Edition

- January 07, 2016
A friend recommended that I write about what I think about D&D 5E, having now run it pretty consistently for a year now.  What I initially thought about the game still really stands, namely that it has this quality of feeling like the "mode" of Dungeons and Dragons.  Not the average, not the median, but the mode--the most common example in the sample set.  There are, I know for a fact, people who play D&D in some pretty innovative and creative and pretty gonzo ways out there that might skew a sense of "mean" or "median" when it comes to some hypothetical sample pool of what people play fantasy RPG's, but if we look for how likely the game is to be played by everyone, this is probably the ruleset for that play.  To wit: elves, dwarfs, and humans; classes and spell slots; kobolds and copper pieces. I do not feel like that is a criticism, that somehow the game is lessened by that quality, but merely that it is an observation. In fact, the pl
3 comments
Read more

Fox and Howl: Villains for Prowlers and Paragons 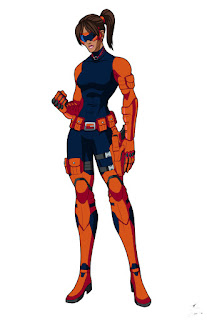