Showing posts from November, 2012
Show all

The 25 Villains of Christmas! 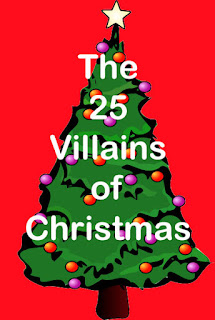 Okay, this might not work, but here's what I'm going to try to do.  Sometime in the near future I want to run a Marvel Heroic Roleplaying  game in my home-grown universe known as "Earth 3."  I figure that what that gaming universe needs is a pantheon of supervillains: great, small, and everything in between. In order to do that, I am taking on a fairly ambitious plan: create 25 unique (or at least not wholly-derivative) supervillains between now and Christmas Day.  Now, these will just be the stats and background that would be known to the superhero community at large (that way my players don't have an edge).  I'm also probably not going to swing illustrations, but will just describe the costumes.  I'm not a bad artist, but I can't crank out quality drawings that quickly.  Maybe one of you would like to help?
Post a Comment
Read more

- November 29, 2012
Barking Alien asked a great question over at his blog regarding players whose actions in gameplay deliberately set them apart from the gaming group, or are particularly disruptive to the rest of the group's experience. Am I familiar with this phenomenon?  Honestly, I married it.  My wife, the inspiration behind "Irene" over at Hard Boiled Zombies , once joined a WEG Star Wars Campaign I was running.  She then proceeded to turn over the rest of the PC's to the Empire, collect the reward, and then promised them that in the next session she would rescue them  We never had a next session. Call them "weasel gamers," call them "outlying gamers," call them whatever you want, game long enough with enough people and you'll meet at least one.  In my experience these outlying gamers fall into three categories. The ignorant gamer.   The least common and easiest to deal with version is the person who is so unfamiliar with roleplaying games that they
4 comments
Read more

- November 28, 2012
Sometimes I wonder about RPG-themed blogs.  What do people really put in them?  I can't write about what it upcoming in my game, because some of my players read this blog.  Writing about what happened in my game always seems to me to be a little underwhelming, a little bit like "how I spent my vacation" articles.  Ironically enough, the most prolific RPG bloggers seem to not be gaming at all, but instead talk a lot about what kind of game they'd run if they had people to play with.  Food for thought. I am still gaming, still running D&D 4E.  We had a great bit of moral dilemma in the last story when the lich who had kidnapped the One Female Gamer's PC told her that he had secret knowledge about who really killed her parents, but would only tell her if she agreed to stay with him instead of being rescued by the other PC's.  In character, the One Female Gamer decided she would stay (although personally thinking that she really shouldn't).  The other pl
Post a Comment
Read more
More posts