Showing posts from July, 2014
Show all

The League of Extraordinary Dudes! 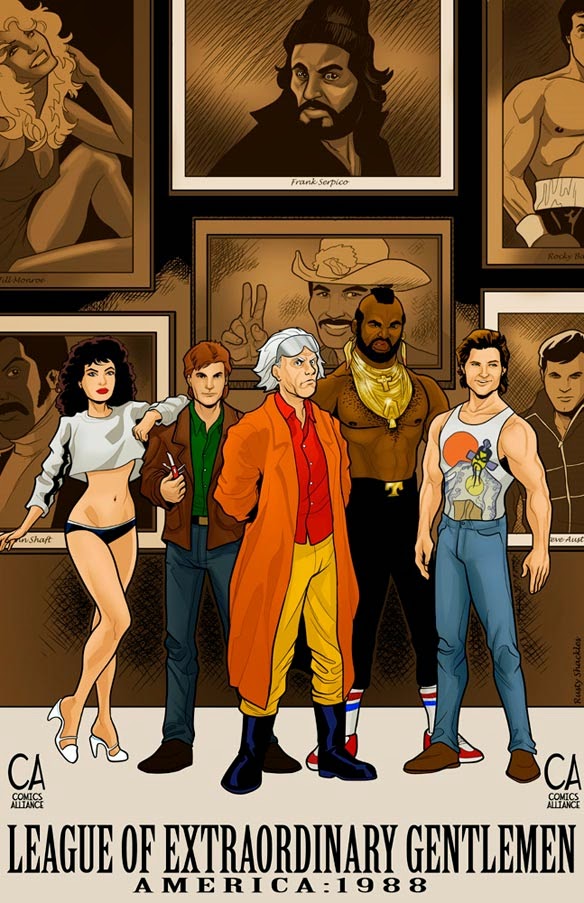 KITT, the crimefighting supercar, has been destroyed, and a hospital-bound Michael Knight sends out a call for heroes to solve the mystery!  Who will respond?  B.A. Baracus?  Doc Emmett Brown?  Jessica Fletcher?  Alf? I'm running a Fate RPG one-shot in a couple of weeks, and decided to do a fun send-up of the League of Extraordinary Gentlemen featuring characters from fiction, film, and television from the 1980's.  I'll let the players choose whom they wish to play (within reason--I've already nixed the Terminator).  I got the idea from this image on the internet: Jill Munroe?  Serpico?  Shaft?  The Bandit?  Tell me you don't play the play the hell out of this concept.  So, we'll see how it goes.  Already I've got Nancy Drew and B.A. Baracus, although that latter player is also leaning towards Peter Venkmann.
2 comments
Read more

More thoughts about Mi Gran Sueno (and a post-gaming report)

- July 26, 2014
In reverse order of the title, last night we played another session of J Evans' Mass Effect  RPG (a home-grown affair using the Cortex+ rules.  You should totally ask him about it!)  We were missing no less than four players from the group, meaning we had a modest three players. Which reminded me about how good it is to only have three players.  Our group's large size has continually been a problem.  Trying to occupy the attention of even six, much less seven people, poses a challenge.  It's compounded by where we have currently been playing, because the table layout is pretty spread out.  So having three players meant that all three were pretty engaged; the smart phones stayed in pockets and everyone contributed. Even before this, I had considered the possibility of trying to find some way of limiting the size of the gaming group without offending people.  One thing I considered was running a game more frequently than I normally do (say, weekly) and offering slots for pe
2 comments
Read more

In which I talk about D&D, skating, and cola

- July 18, 2014
So here's a little trivia bit about me: I listen to a lot of Top 40 Pop music.  Why, you ask?  Because I skate a lot.  And if you go to roller rinks in America (especially on weekend afternoons) you will here two hours of the most common pop tunes out there.  I will say this, though, I don't find them offensive, just bland.  That's because they've been designed that way--to appeal to the broadest (young) audience. The latest iteration of the D&D feels the same way.  It's not bad, it's not offensive, it's actually okay.  But it is built to be as inoffensive and homogenized and possessing the broadest general appeal.  But there's a problem, and it has to do with cola. Not Coke, or Pepsi, just cola.  You go into any restaurant and you can have a cola.  Yes, they'll either be Coke or Pepsi and I get people have preferences, but you can get a cola anywhere.  In fact, the whole restaurant/beverage relationship is designed that way.  And if it was 198
Post a Comment
Read more 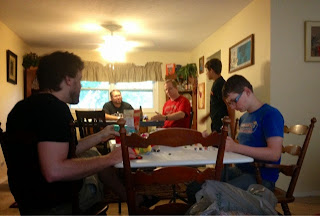 Mass Effect meets Leverage. Sci-if caper goodness!  The plot featured the team tracking down an illegal cyberware operation working out of a high-end hospital.  The team went in undercover but ended up running into an old villain who recognized us and tried to escape.  One hovercar chase later, and we had captured him. Good session, although it was pretty chaotic at times.  It's a strange thing to say, but I have an observation that is in many ways my fault.  I usually host the gaming session in my basement with my big 4' by 8' gaming table, but this weekend I really didn't have the time to get everything cleaned up and ready, so we gamed at another player's house.  Space was cramped and there were a lot of players (including several young ones), and it was sometimes hard to hear the GM, and the whole layout contributed to the level of chaos.  I clearly need to get my house cleaned up before the next game!
Post a Comment
Read more
More posts