Showing posts from November, 2013
Show all

- November 27, 2013
Let me say, first off, that I think that aside from the somewhat-disconnected Hulk movie(s), I think that Thor is the weakest character in the Avengers franchise (the new casting for the Hulk in the Avengers movie pretty much resurrected that character from the "worst" slot).  My son loves Thor, and loves both the movies, but Hemsworth is so leaden as the lead character that it is no wonder they gave Hiddleston as much rope as he could handle. I get that Hemsworth looks like Thor should look, and that Thor the comic book character is pretty wooden on his own.  But setting him aside, Natalie Portman continues to such the wind out of every scene she's in to the point where you really are rooting for Thor to hook up with Sif instead.  Stellan Skarsgard is played strictly for slapstick laughs.  Kat Dennings is also a comic relief reprisal, but I think she should have been cast as Hel rather than jokey-sidekick to the sidekick.  And Christopher Eccleston has the double ignom
2 comments
Read more

First thoughts about Edge of Empire 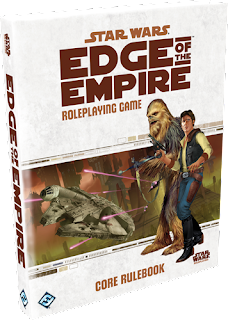 I've actually been on a bit of a RPG-buying kick lately, a sure sign that I'm either a bit depressed or just suffering from the wandering foot of my hobby tendencies. Edge of Empire  is the latest iteration of a Star Wars RPG, this one by Fantasy Flight Games. I own every Star Wars RPG out there, from the first edition by West End Games to FFG's new stop-a-high-caliber-bullet tome, and I may like this one the least, which is saying a lot since I'm including Wizards of the Coast's d20 version in there.  Why?  I'll tell you. It's not, as it turns out, because of their dice that are game-specific and damned expensive ($18 for a set), although that does cheese me off.  It's even not the way that they reduce all social interaction to a die roll, with little in the way of in-character roleplaying affecting the outcome. No, it's the way they chose to settle into the Star Wars universe.  In EoE, the PC's are all smugglers, soldiers, bounty hunte
4 comments
Read more 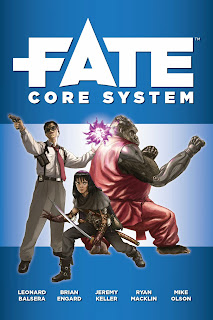 You know that something is amiss when even my wife can figure out the problem with an RPG... I bought the Fate Core System book (Evil Hat Productions) not too before heading off to EOW and have been reading it intently every since.  It is not a complicated game per se , just one that take a lot of things that are relatively unspoken or hand-waved in RPG's and builds the rules around them. I don't want to get too deep into the rules in this post, but rather just look at the pivotal one: Aspects.  Aspects are akin to the Distinctions in Marvel Heroic Roleplaying .  Actually given the timeline, MHR ripped off FUDGE/Fate.  But since I knew MHR first, I have to work from what I know.  In MHR, if you do something that dovetails with one of your Distinctions, you can either get an additional d8 (if it is positive) or a d4 and a Plot Point if it suggests a negative occurrence.  So for example if you use "Highly confident" to do something smoothly because, well, you th
Post a Comment
Read more

- November 04, 2013
If you read my miniatures blog (and some day I will integrate the two) you can see that my miniatures and wargaming hobby pursuits tanked horribly in October.  On the other hand, I had three solid days of RPG goodness and squeezed in a home game session that went very well in the pumpkin month. Now all that gets flipped in November.  I already had to cancel the gaming session on November 1, and will likely cancel the one on November 29, the day after Thanksgiving.  That leaves one session for the home game for November, and after one session the previous month it is feeling pretty neglected.  Compounding this is the fact that there will likely be only one session in December, since I don't think we'll be gaming on the 27th of December. Having things taper off during the holiday months isn't anything new, nor I suspect is unique to me and my gaming group.  It is a good time to recharge the batteries creatively and come back with some big story ideas to unfold for the res
Post a Comment
Read more
More posts