Showing posts from September, 2013
Show all

Gift Boxes I Made 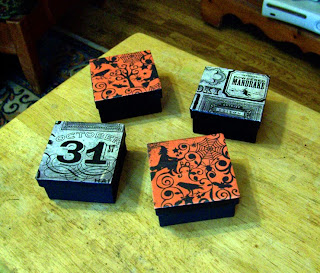 So, in addition to everything else, I get on a craft kick every now and then.  The benefit to doing craft stuff is that you can usually make it fairly cheap, have fun, and then give it away so it isn't taking up room in your house. With Halloween coming up, I decided to make some craft boxes in which I could later put candy and give to my office staff. Here's a pic. They are basically cheap paper mache' boxes from the hobby store painted black, then the lids have Halloween scrapbook paper decoupaged onto the top.  Easy peasy.
2 comments
Read more

Playing 13th Age and other things

- September 23, 2013
Last Friday my original gaming group was supposed to gather for another session of Marvel Heroic Roleplaying  but it turned out only two players could make it, and since it was last minute I was only able to bring in one person from Group Two. With only three, we decided to not bother with the pre-arranged MHR adventure but instead to try out 13th Age , using the pre-written mini-adventure in the back of the rulebook.  Their impression of the game is about the same as mine: it's a fine lightweight version of 4th Edition, with some clever narrative/story elements in PC creation to help get a handle on the background of your character. At the end, the question was "how does it compare with other similar games?"  I was surprised to hear that while everybody thought the "icon relationships" and "one unique thing" was pretty cool, the lighter rules didn't necessarily impress people.  The players liked having a greater variety of options available wh
1 comment
Read more

PC vs. PC conflict and the Magic War begins

- September 11, 2013
We're back with Group 1 for Marvel Heroic Roleplaying , although since most of Group 1 showed up last weekend, it really just feels like we are picking it up from there... Scene One We begin with the various PC's going about their business, attending their regular jobs or lounging about the HQ.  Argent, the NPC hero whose secret identity was publicly revealed in the last session, continues to rail against Randall Parker, the TV personality who aired footage of Argent  transforming in a back alley. Returning from a pilates class, Union Galactic witnesses an explosion at the hospital where the three victims of the Project: Sunburst nuclear facility meltdown are being treated.  He rushes over and finds the three are now embued with superhuman abilities.  The former head of the facility is now calling himself Helios, and claims to be sent to return humanity to worshiping the Sun.  With him are Radium and Ray, and the three beat down Union Galactic into unconsciousness. Thankfu
Post a Comment
Read more

- September 10, 2013
Two Fridays ago we tried out the first of the "two parties/one gaming universe" model by having a session for "Group 2."  Unfortunately only two members of Group 2 were able to make it, so five members of Group 1 showed up to round out the anemic team.  Seven is way too many for Marvel Heroic Roleplaying, but I hit what will likely be the first of many snags with the 2P/1GU model.  I had posted on Facebook that I had space in Friday's game, and every single person in Group 1 immediately piped up to say they could play.  My son graciously stepped aside, knowing that I would now owe him a favor, but I didn't want to ask any of the other players to do the same.  I may have to go with a first come, first served policy or some kind of "credit" system where if a player has missed a session in his own game he gets first crack at the other team. Anyways, the two new members of the Ultimate Posse are Ghost Raven , my daughter's somewhat lighter-hearte
Post a Comment
Read more
More posts