Showing posts from September, 2019
Show all

Boy, it feels good to see a project through to completion.  The color scheme looks really good.  It was a good first run, especially in getting an idea about much terrain a single box can hold. So what's next?  A dungeon?  A crypt?  Science fiction?
Post a Comment
Read more 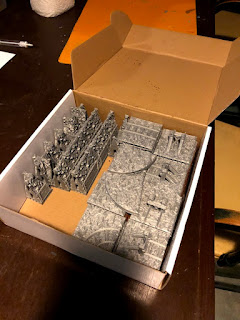 For all you 80's kids out there, do you remember the idea of "playsets," like Castle Grayskull or the GI Joe Command Center or the Death Star where you could set it up like a action-move dollhouse and create story after story? So here's what I am doing: Creating kits using the boxes that PLA filament comes in to hold thematic terrain for roleplaying games. For those of you who do not know, PLA filament is the plastic thread a lot of 3D printers use to make stuff.  The box is roughly 8" by 8" by 3".  Half of the box can hold about 48 floor tiles that are 2" square while the other half can hold walls, corners, and other assorted pieces.  Fully assembled, the kit would hold enough terrain to cover a square roughly 16" to 18" on a side, which for a small table is a pretty good layout.  It can also handle three or four small rooms easily.  By re-configuring the kit once or twice, you could theoretically handle eight to twelve encounters,
Post a Comment
Read more
More posts