Showing posts from March, 2016
Show all

When Players are too smart 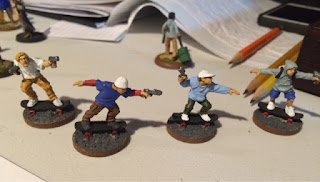 I painted these miniatures a long time ago and they've never seen the light of a gaming table until last night, when they got to play the role of "douchebag fratboys of the zombie apocalypse." I wanted to write about smart gamers, and why GM's sometimes get frustrated by them.  I think sometimes GM's, myself included, anticipate player activity based on what the GM thinks would make for a cool scene.  For example, the party ran across four police officers (post-apocalypse) clearly attempting to abduct a young girl to sell her into slavery (it's not a nice world).  The GM thought we would get riled up and start blasting the evil police and rescue the girl.  One player wanted to do that.  I didn't.  I figured that four armed law enforcement NPC's could do some serious damage to five regular civilians with improvised weapons.  So I my PC buy the girl using some contraband the PC's had acquired.  Hollywood heroic?  No.  Maybe Walking Dead , bu
Post a Comment
Read more 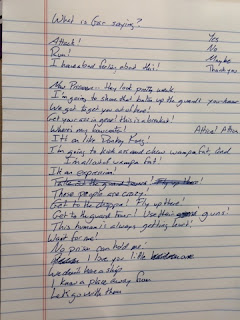 The latest campaign in my gaming group launched, in this case a Star Wars (West End Games) campaign run by John.  It takes place around Episode VII, so it is the First Order as bad guys. My daughter is playing a young female bounty hunter, so I'm playing the Wookie First Mate.  I'm her dad's old partner who is now showing his "niece" the ropes.  As "Uncle Gar" I decided I wouldn't speak in character, but instead would growl and write what I was saying on a notepad so Basha, my daughter's PC, could communicate it to the other players.  Here's a quick pic of the pad, partway through the session: It was a lot of fun because sometimes my daughter would go "I don't get that joke" or "I totally agree" but then not tell the other players what I had "said." The other PC's are a Brash Pilot, a Smuggler, a Scout, and a Failed Jedi.  The game is off to a good start as the bunch of us escape a First
2 comments
Read more

My cranky, probably annoying nitpick of the day

- March 10, 2016
The latest episode of Table Titans You row a boat facing backwards.  Even in a fantasy RPG.
2 comments
Read more

- March 08, 2016
The other Rob took over my D&D game once I had wrapped up my Grimfest storyline, and last Friday ran his first session.  I'm playing Maarku, a human barbarian/gladiator who had fought his way out of the slave pits to freedom. The group is approached by an ambassador from the Windsong Islands to ask if we could travel there to help the recently-widowed Majestrix consolidate her claim to the throne.  Opposing her are rebels called the Sea Vipers and a neighboring country controlled by a council of mages.  The big reveal for the session was the existence of airships, flying craft powered by magically-controlled air elementals. The group knows a plot hook when we see one, so we headed off to the Windsong Islands.  We were attacked by pirates, met the Majestrix, and tried to find clues to the mysterious island where a pearl that allows someone to scry at great distance (and presumably help the Majestrix defeat her enemies) can be found.
Post a Comment
Read more

On why I may NOT be running Fragged Empire

- March 03, 2016
Fragged Empire has been getting a lot of talk around my FLGS and my gaming group, and may become the new Hot Sexy of Sci-Fi RPG's, and for good reason.  It's got an interesting, rich backstory that is pretty easily conveyed to new people without sounding too derivative of existing sci-fi franchises.  Basically the PC's are one of four genetically modified servitor races trying to crawl out of the rubble of an interstellar war that wiped out the masters of both sides.  It touts itself as having strong themes of exploration, resource management, and cultural conflict. It also looks a lot like D&D in Space.  Or more accurately Murderhobo D&D in Space.  First, there are four races: the Corp, who are basically human despite the fact that there are no more humans in the galaxy; the Kaldor who are Space Elves but with four pointed ears instead of two and even have dark, evil counterparts; the Legion who look like orcs but act like dwarves; and the Nephilim, which are the
Post a Comment
Read more

A new edition of Strike Force with new information and a physical book too?  You know I'm all over this.  And you can too by clicking here . For those who haven't read my many blog posts about the original sourcebook, it was a journal of a Champions II campaign run by Aaron Allston for years.  It included PC's and NPC's, a timeline of the campaign, and some invaluable advice for running a campaign, especially a long one. The new book isn't just a reprint of the old one, but rather features new information regarding the campaign based on notes from its participants.  Best part?  Aaron Allston's estate is getting a portion of the proceeds. This has been fully funded, so I'll let you know when the book arrives.
1 comment
Read more
More posts