Showing posts from April, 2012
Show all

The Pathfinder Experiment, Part One

- April 14, 2012
Okay, I'll give credit where it is due.  My son pressured me into running Pathfinder for him, and the rest of my gaming group went along.  As it turned out, we had a great time. The story was really straightforward: the PC's are trapped within a large building when a huge earthquake strikes the city.  The thrown-together survivors of the quake agree to accompany a small NPC girl back to her father, a wealthy alchemist in the city by moving through the city's sewer system and avoiding the chaos above. Along the way they battle a few denizens of the sewers and meet a small and very smelly group of cultists.  The father points them towards the home of a powerful wizard who might be able to ascertain the source of the (unnatural) earthquakes, and the PC's rescue said wizard from a demon the earthquake accidentally unleashed in his tower. A few thoughts about the game: I don't know if it was just changing the game system or what, but the group approached encounter
Post a Comment
Read more 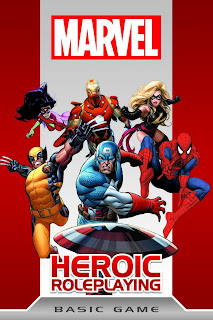 I picked this game up yesterday, having read a lot about it at various blogs that I follow.  I'll be putting up a decent review of it after I fully digest it, but in the meantime I thought I'd as you, gentle readers, a couple of questions. First, how important is PC balance to you?  Some games have a pretty strong mechanic towards PC balance, usually enforced by a crunch-heavy system.  Others, like Rifts  for example, have uber-powerful characters fighting side-by-side with guys who are barely more than everyday humans.   Marvel Heroic Roleplaying (which I'll call MHP for short) eschews PC balance to reflect the disparate power levels of its source material.  Hawkeye and Iron Man on the Avengers, or Colossus and Shadowcat on the X-Men. Frankly, and I may be in the minority about this, but I think it matters a lot.  There's a scene in the inital run of Justice League Europe where Captain Atom flies up to this big evil cloud and just incinerates the entire t
1 comment
Read more

Why I'm about done with DC Comics

I finally got over to my local comic book shop to empty out my pull box.  I'm a sucker for team books, and right now have The Avengers , Justice League , Teen Titans , and Batman and Robin being held for me.  I had dropped Amazing Spider-Man  after the whole "Spider Island" story.  DC has recently done the whole "relaunch the entire universe" thing (aka "the 52"), and I've been hoping that it would bring something interesting to the table. Justice League #7 Nope.  I'm pretty much done with the Justice League , but my son is trying to get me to continue with Teen Titans .  After six issues to introduce all the characters, Justice League #7 has shifted into the post-modern crypto-fascist drek of the '90s.  The US Government is antsy about the League having a new satellite, people want the League to take over the government, and the members of the League continue to be snarky, unlikable characters with no chemistry. Look, DC Comics.  T
2 comments
Read more
More posts