Showing posts from March, 2015
Show all 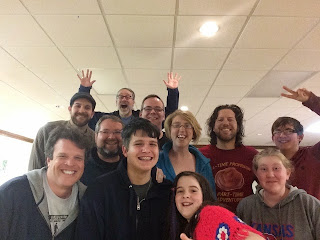 For the last few months my gaming group has been meeting in smaller sub-groups, but last night they all wanted to be there. So I ran a session with all ten players plus one additional guest. It went pretty well, although we had some pretty stringent rules about quickly taking your turn.  Anyways, we took this chance to get a rare group photo. I have to tell you, I feel like the luckiest gamemaster in the world. I love these guys.
2 comments
Read more

Friday Night Gaming Recap: the Ride of the Demon Frogs! 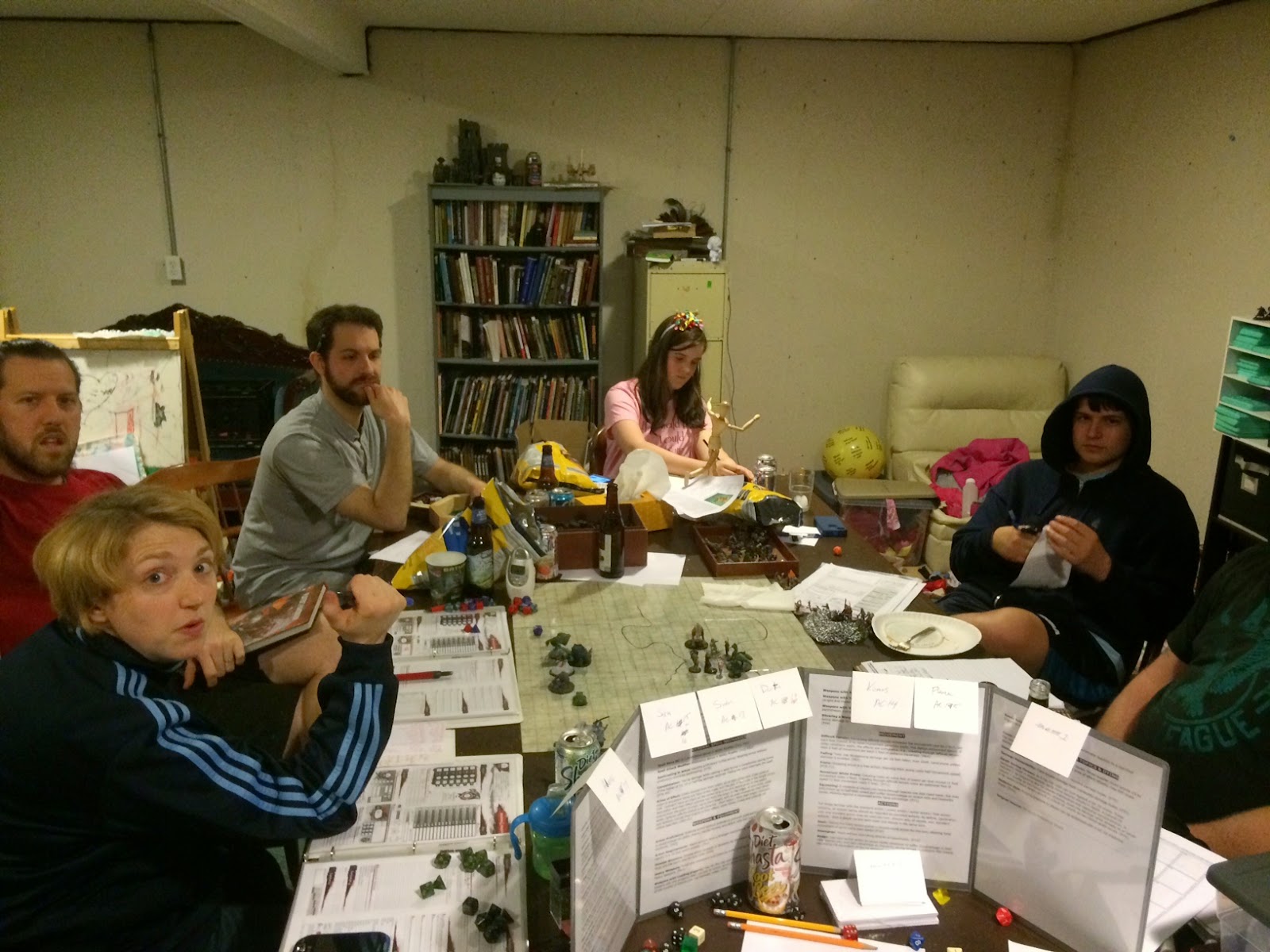 (L-R) Thief, Monk, Monk, Bard, Paladin, Warlock It's another game night, and after having fled from confronting the Basilisk on level three of the Tomb of Abysthor, the group decides to spend this session clearing out the top level.  Since the monsters are generally worse the farther you go down, this meant a lot of easy, low-XP encounters.  However, the group did manage to find no less than two different treasure hoards, so they are feeling pretty flush with cash right now. At one point they did come across a large, underground lake, which turned out to be the home of a half dozen Giant Poisonous Dire Frogs!  Flaria the bard managed to charm one with a spell, while the others were slowly killed by the PC's.  At one point, however, Alaric the monk was dragged into the lake by a giant frog, and so Durton the half-orc paladin had only option: ride the charmed Giant Poisonous Dire Frog into battle! Sadly, D&D minis never made a Giant Poisonous Dire Frog miniature.
Post a Comment
Read more

The Menace of the Joker, Part Two 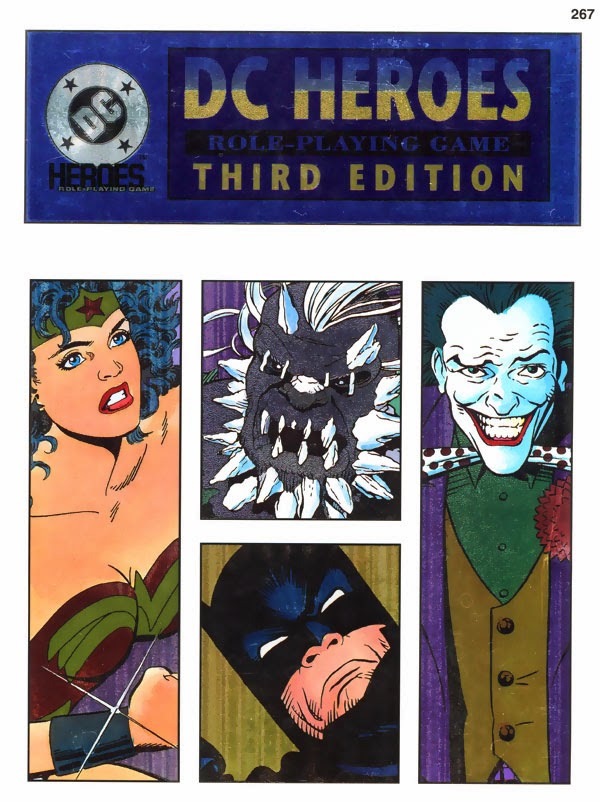 Having vented my spleen about the whole Batgirl/Joker/DC Comics fiasco out of this week, I would now like to return to my regularly scheduled discourse on superhero RPG's. A while back I mentioned that I was interested in learning more about the DC Heroes RPG, if only because it seemed to be this oddly forgotten RPG from days of yore.  I owned a bunch of sourcebooks, but not the game itself, and could only glean some sense of the game's mechanics. Well, over Spring Break with the kids I happened to be traveling out of state to see my parents, and on the visit hit a FLGS in the area which turned out to be the Holy Motherlode of out-of-print RPG's to the point where I could have blown $200 there easily, if I was so inclined. I wasn't, but I did pick up one book: Superman had just died when this edition was published, otherwise I'm sure he would have made his way into the cover.  By the way, nice gratuitous cleavage. I haven't had a chance to work my w
3 comments
Read more

The Menace of the Joker, Part One If you follow comic-book news, you know this week's hullabaloo has been about the variant cover to Batgirl 41 by Rafael Albuquerque. The controversy is roughly two-fold, maybe three.  First, the cover is is graphic departure from the general editorial direction the Batgirl  comic has been going, which is to say de-aging her several years into more of an older-teenager/young adult (making her more like Marvel's popular Ms. Marvel ). It also is, by the author's own admission, a homage to the graphic novel The Killing Joke , which by pure coincidence I had checked out from the library and had re-read this week.  A lot of people love The Killing Joke  and it was one of DC's most successful forays into breaking into mainstream literature with a graphic novel.  A lot of people really dislike The Killing Joke  because it represented a "girls in refrigerators" moment before the term had been concocted: Barbara Gordon, a longtime Bat-sidekick, is maimed and sexua
Post a Comment
Read more

Ants and Slugs and Bears, Oh My! 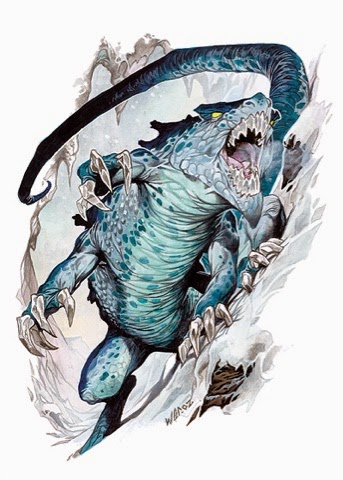 This Friday's gaming group (spell caster heavy, but with a paladin, monk, and Druid) spent their session wandering around the third level of the Tomb of Abysthor. What was cool was that the monsters they all ran into were all pretty unusual and the group didn't just "meta game" the threat level but treated every monster like it could kill them all.  They also decided to avoid one of the major threats of the level (a basilisk) and cone back later with a mirror!  Smart call...
Post a Comment
Read more

Getting Caught Up on the Home Campaign 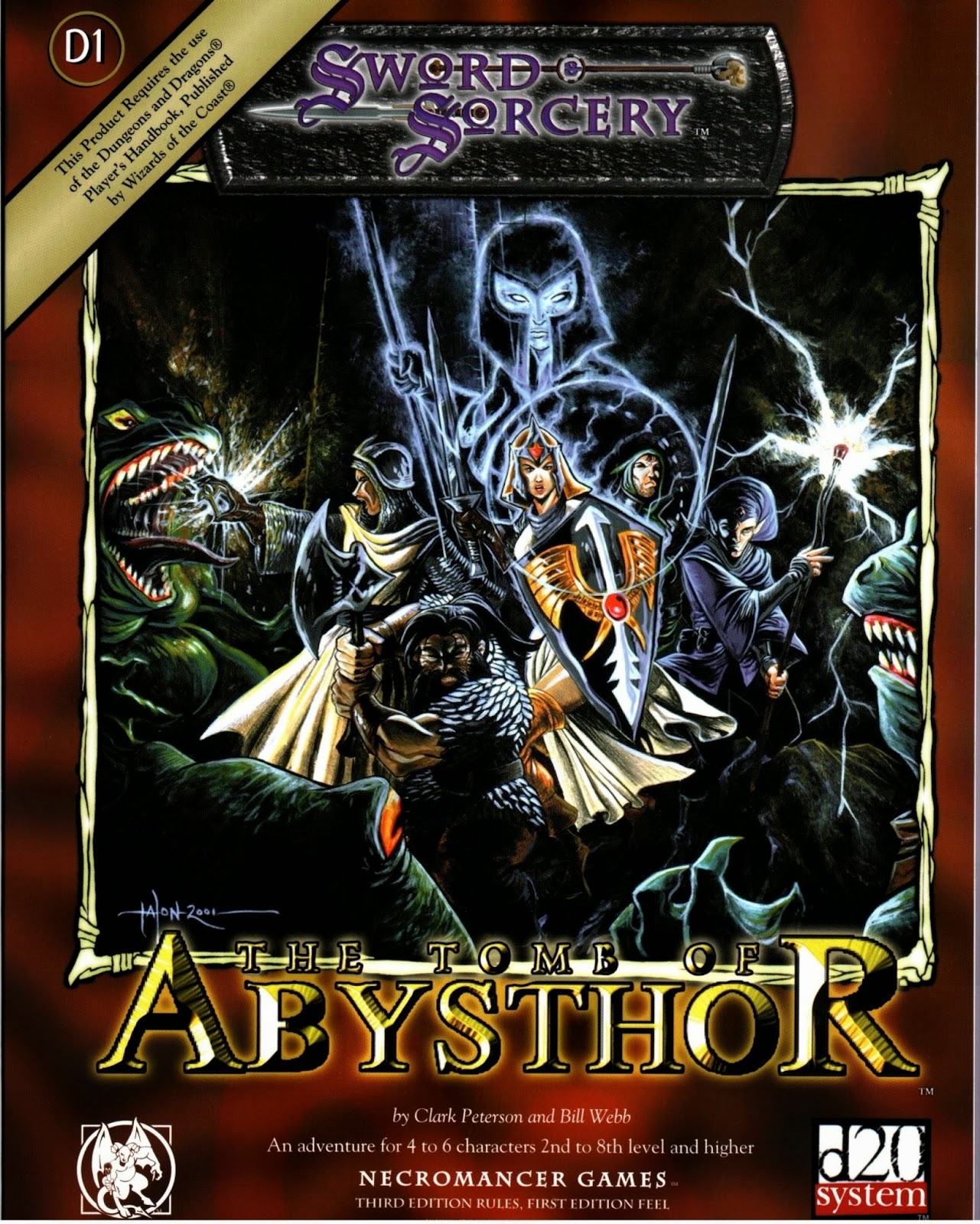 I realized I had missed a session in there where I introduced a big dungeon.  It is not really a mega-dungeon, more like a kilo-dungeon or a hecto-dungeon, since it only have five levels and not that many rooms.  It's The Tomb of Abysthor , a 3.X adventure put together by Necromancer many years ago. Abysthor  has been sitting on my giant bookshelf of RPG stuff for a long time, probably picked up at a Half Price Books since I don't usually buy published adventures, even fantasy ones.  On the whole I don't particularly care for them.  It means internalizing a lot of data that I didn't create, meaning I have to almost translate it over into WQRobb data in the process, and stuff gets lost that way.  It also means it isn't my style of gaming, which is really the case in Abysthor . But, the last two weeks have been eight different kinds of miserable for me, and that translated into both a lot of time and energy being spent elsewhere and just not really feeling the
Post a Comment
Read more
More posts