Showing posts from July, 2013
Show all

- July 31, 2013
Well, maybe this'll turn into some sort of cross-blog dialog, but Blacksteel followed up my response to his post on in-print and out-of-print games here .  He notes several games that he really likes that didn't make it, as well as some guidelines for what makes the cut when it comes to taking up precious space on his gaming shelf. I'll admit to being more of a collector than Blacksteel is, although having to move all my possessions three years ago has certainly blunted it.  I gave away over 100 RPG books to the local public library as part of their youth program (some youth somewhere in Ohio might currently be playing the Hercules and Xena RPG because of me).  Nowadays the internal process for "should I buy or should I not buy this RPG" tends to go like this: 1. Am I going to run this game? Yes: buy it. Maybe: go to 2 No: go to 2 2. Is it something that look really interesting, like maybe I could steal something for another game? Yes: go to 3 No: don&#
2 comments
Read more

- July 29, 2013
Friday I changed up my typical RPG experience in two ways.  First, I ran  Mutants & Masterminds  for the first time ever. (I've never even played the game before.)  Second, there were only two players from the group, so I decided to invite one of the couples that I am hoping my compose a second group.  I then added to that mix my daughter, who has been desperate to game with a group like her older brother, and my wife (aka "The Real Irene").  So out of a group of six, only two had really gamed before. M&M is definitely different from Marvel Heroic Roleplaying.  It didn't take long for people to figure out the rules, especially since I used the archtypes from the main rulebook which includes the quick "Offense" and "Defense" notations.  I can not figure out for the life of me why the Defense sections just don't add the 10 which is added in pretty much every combat action for which they are used.  Actually, constantly adding 15 to Damag
Post a Comment
Read more

- July 25, 2013
Blacksteel over at Tower of Zenopus posted an in-depth review of a game I'm interested in, 13th Age .  13th Age is a self-proclaimed "love letter to D&D."  I've played the game, but haven't read the rules.  In my opinion, Blacksteel's most insightful reflection on the game came in the last paragraph: The main thing I worry about with a game like this is that although it's getting a ton of attention now where will it be in a year or two? Castles and Crusades was a big deal when it came out as a lighter, more old school flavor of 3E and how active is out for it now beyond occasional adventures? How many groups are playing it? I loved Arcana Unearthed and later Arcana Evolved and they had a good run for maybe 4 years and now there's not much support at all. Book of Iron Might was the same way. With everything from Numenera next month to the ramping up of "next" over the next year to the ongoing Pathfinder juggernaut, I'm not sure how
1 comment
Read more 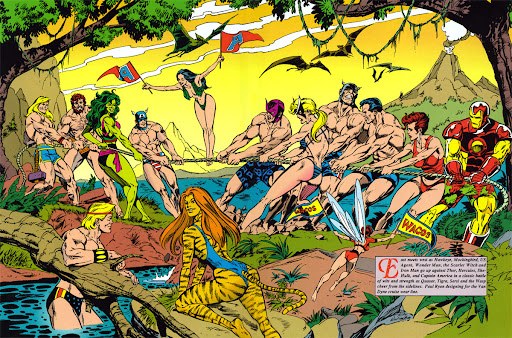 As I've mentioned earlier, I like the idea of bringing new people into roleplaying games, or bringing people back into RPG's that had dropped away.  So I've been pretty excited that, through some conversation, that four or five people have expressed an interest in getting together and gaming with me.  That's in addition to the six I already game with in my regular game (a.k.a. "The Ultimate Posse"). So here's my idea.  Two groups, one world.  The world shows signs of the other group, everything from articles in newspapers to dead orcs in rooms with their pockets emptied.  One step forward, it would be cool to have players move from group to group, sometimes because they missed their own team's gaming session to actually re-shuffling teams now and then. Now there are lots of ways to do this, and I spent some time weighing each of them: fantasy, science fiction, even a conspiracy/horror game ala Fringe  or The X-Files .   But when I balanced what I t
3 comments
Read more

- July 08, 2013
In the past couple of years, I have had mixed success with Kansas City's RPG convention KantCon.  Most of these problems revolved around the fact that a) I went on Friday, b) I didn't pre-register for games, c) I brought my kids.  Last Friday I only did a) and b), since the kids are visiting grandparents right now.  I also needed to be back by the evening, so I was really only able to participate in a morning and afternoon session. Thankfully this year I managed to get into a game in both sessions, including one I really wanted to play, namely 13th Age .  13th Age is a fantasy RPG derived from D&D by Pelgrane Press .  It's got some big names behind it and a lot of publicity and support on the interwebs, and despite the fact that I own a dozen fantasy heartbreakers already, I was interested in giving it a try. I'm particularly grateful that I was given a seat at the table, given that I was the ninth  person to show up for the game.  With that many players and jus
2 comments
Read more 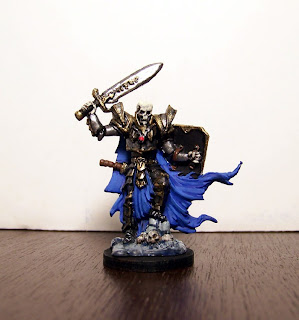 So a while back I, like many other people, ordered the Reaper Bones Kickstarter at the Vampire level, also opting for the additional red dragon and Cthulhu miniature.  Well they arrived, and I've started interspersing my larger army projects with the occasional fantasy miniature. Arrius the Black, Skeletal Champion The first one I have painted was a pretty easy one--mostly armor and flowing cape.  The detail is surprisingly good given the medium, with one exception.  The sword wielded by the bearded giant is terribly bent.  I understand you can reshape the white plastic with hot water, but the sword remains very bendable and I'm not sure would retain the new shape. No real idea about what I'm going to do with these guys just yet, except just enjoy painting all of them for years to come.
Post a Comment
Read more
More posts