Showing posts from May, 2015
Show all

The "What Are You Good At" GM Challenge

- May 28, 2015
Aside from posting about gaming sessions, I've been not doing a lot of blogging on this blog lately, so when Adam over at Barking Alien posted his What Are You Good At GM Challenge , I took the bait. So I have to list five games I am great at running, three I am not so hot with, five reasons you consider yourself a good GM, and three things you feel you need to work on. Before I do this, a sidebar.  I've had people tell me I'm a great GM, but some times I just don't see it.  I had a conversation last week where I began to wonder if I do this well at all, in fact.  So I have to overcome my own skepticism to do this list.  Also, I appreciate how Adam thinks that people have run eight different games.  God love that guy.... Without further equivocation... Games I am great at running : Old School Fantasy (the "murderhobo" campaign) Superheroes Picaresque Science Fiction (aka "Free Trader" sci-fi) Post-apocalyptic Pulp/Adventure stories Ga
Post a Comment
Read more

The Black Monolith is destroyed 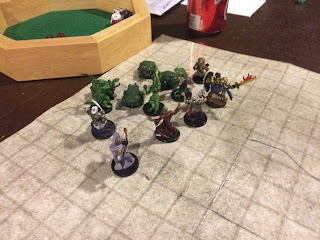 Warning, spoilers for the module "The Tomb of Abysthor" lie ahead.. Tonight the group (at least a select five of them) managed to make it to the infamous Black Monolith of the Tomb of Abysthor. They fought past frogmen cultists... Frog men and giant frogs?  Charge! ...Sphinxes with deadly riddles, and finally to the monolith itself, where they discovered the only way to destroy it was by making the ultimate sacrifice: levels of experience points!  What's worse, only one PC was the right alignment, Lawful Good! The rest of the party?  Neutral good, the classic PC alignment. His sacrifice was greatly respected by all, and the group swore to help him find a way to restore him, aside from just grinding on low-level monsters.
Post a Comment
Read more 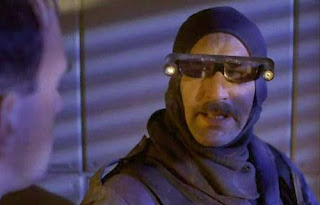 I had not realized this was Robert Deniro until I had to go looking for a photo. Last night I was chatting with Adam from Barking Alien and the topic ranged around to difficult types of players.  There's lot of types that make for a challenge, but one of the most subtle kinds of challenging player is the one Aaron Allston dubbed "The Plumber" in his book Strike Force . The Plumber is the kind of player who derives most of their pleasure gaming in the exploration of his or her own PC's character.  In many ways Plumbers are great players to have at the table: they usually have well-established backstories and roleplay a great deal.  Where Plumbers can run amok is when their interest in their own characters begin to eclipse the participation in group storytelling that is essentially to roleplaying games. I'll give you an extreme example from my own gaming experience.  When I was running RPG's in college I had a Plumber named Chris in the group who one da
Post a Comment
Read more 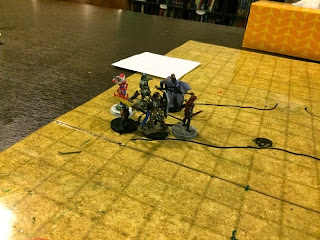 The group flees the scene of their vengeance So, with their trusty NPC torchbearer Knobbyfoot dead at the hands of Natasha, a drow wizardess living in the second level of the Tomb of Abysthor, the group heads back to Grimfest (the campaign home base).  After some deliberation with the local clerics of Hieronymous, the group decides to plump down a whalloping 1,200 gp to have the gnomling not only raised, but reincarnated into a new, non-deformed body. With a new high elf hireling in tow, the group heads back to level two with blood in their eyes.  After clearing a path through the manticores, a vrock, and several zombie ogres guarding her, they have their vengeance against Natasha, although not without no less than three PC's dropping to zero hit points. Flaria, in a rather dark roleplaying moment, fulfills a vow she made when Knobbyfoot was killed when she drags Natasha's corpse back to the cave near the entrance to the Tomb of the 99 Mad Monks and leaves the remains
Post a Comment
Read more 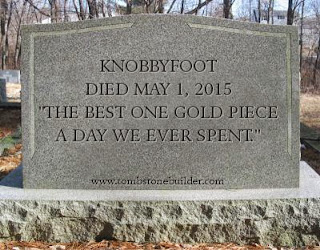 The tombstone may have cost more than the hireling's wages to date Note: spoilers to the adventure "The Tomb of Abysthor" follow Last Friday's group decided to explore the second level of the dungeon, which had really only been discovered the previous gaming session.  The northern half is infested with stirges, and the group managed to stumble across two chasme (fly demons) who are probably the source of them.  The two chasme were pretty lethal opponents because they have a droning they emit which causes PC's fall unconscious in their presence.  That's pretty nasty for a CR6 monster. But the heroes prevail and make their way to the southern portion of the dungeon level, which is filled with a purple hazy cloud that prevents vision, a big problem when there are zombie ogres wandering around.  In the haze-filled area they find Natasha, a beautiful drow who says she is the prisoner/concubine of a powerful wizard named Balcoth.  The group agrees to rescue
Post a Comment
Read more

- May 01, 2015
Like so many others, I thought I'd take Lowell Francis' suggestion that we reminisce about what we were gaming ten years ago on our gaming blogs. What's interesting for me is how ten years ago appears to be such a lull for so many gaming bloggers, and I am (or was) in the same boat. Twelve years ago, I got a new position and a new assignment and was shipped out to a small, rural town in western Ohio.  I ended up staying there for eight years. It would be impossible to try to sum up eight years of my life in a small frame of time.  Sublimely beautiful and deeply scarring might be a good try.  I'm still living with a lot of what happened in that time, not the least of which was the birth of my daughter (on the good side) and a lot of other stuff on the bad.  But let's stick to gaming. I was in a very small town, and had little in the way of social outlets.  The internet put me in contact not with RPG enthusiasts, but GW-related wargamers, and so I shif
Post a Comment
Read more
More posts