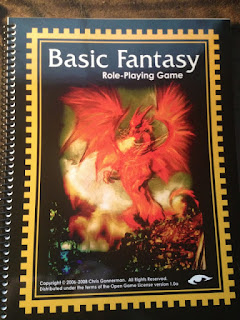 Basic Fantasy Role-Playing Game combines the ethos of Old School Dungeons & Dragons without the slavish devotion to antiquated and unhelpful rules, and its free.

Retro-clones of D&D often fall along a certain spectrum in terms of where in the D&D chronology they are attempting to emulate.  BFRPG falls somewhere between "Basic/Expert" and "1st Ed. AD&D" but also goes ahead and ditches things like descending Armor Class that regardless of how you might bend over backwards to justify, is counter-intuitive to most people.

What does it have?  Four races (human, elf, dwarf, and halfling) and four classes (fighter, magic-user, thief, and cleric).  It has the standard battery of D&D monsters and spells.  It feels like D&D, but it has the house rules that I think many people would apply already built in.

BFRPG is, as I mentioned, freely available on the above-linked website, as is quite a bit of supplemental material, adventures, etc.  It's creator has not chosen to make the game available on popular RPG download sites like DriveThruRPG, and it hasn't seemed to have captured the following other retro-clones out there have.  But like many, if I were to run on OSR game, this one would be a contender.

Here's a picture of my copy, all printed out and in its own binder (featuring a stereotypical racy cover).